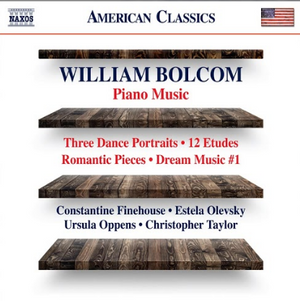 William Bolcom was awarded the 1988 Pulitzer Prize in Music for his 12 New Etudes for piano, and his music has always revolved around works for the instrument on which he still performs as a soloist and accompanist. This collection of mostly première recordings reveals student pieces that negotiate 20th-century musical battles between the avant-garde influences of Boulez and Messiaen and Bolcom’s love of Schumann, as well as later work that embraces the 1960s ragtime revival and draws inspiration from friends and colleagues in every phase of his distinguished six-decade career. Elegantly performed by friends of the composer, this wide-ranging program is summed up by Bolcom as ‘cleaning house’ in the Charles Ives tradition.