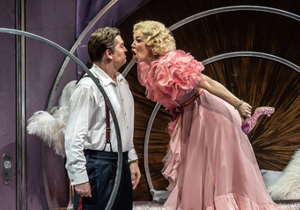 William Bolcom's Dinner at Eight served up at Wexford Festival Opera
"Musically, the work blurs the lines between opera and musical theatre; we hear jazz in the score, and more than an echo of Thomas Adès, especially in the vocal lines of the recitatives. ... Bolcom's score is cinematic to a very high degree, both in the sense that it recalls old movies scores and that it underlines the action with very descriptive passages." -- Pia Maltri, bachtrack.com, October 22, 2018

The party has to go on
"Bolcom's music is a colorful mix of tunes between jazz, Broadway show and Gershwin echoes that, with small atonal interruptions, reveal the cracks behind the facade in society. Bolcom finds a suitable musical characterization for every single figure. Millicent's tone is met very well, for example, which, in addition to the light-sounding theme of Dinner at Eight, presents a socially required and friendly non-obligation in a light waltz rhythm." --Thomas Molke, Online Musik Magazin  (translated from the German)

William Bolcom's "Dinner at Eight" skillfully mimics Hollywood nostalgia
"You have to rely on nostalgia, roaring twenties, jazz brooms, art deco and good jokes to help this slightly yellowed character comedy on the dramatic jumps. Bolcom and his librettist Mark Campbell have succeeded, giving the impression, with a lot of tonal camouflage and literary quotation, that Stephen Sondheim wrote a Cole-Porter-musical and Fred Astaire is dancing around the corner." -- Manuel Brug, October 23, 2018, www.welt.de/ (translated from the German)

"Production values at Wexford are always high, and this pays terrific dividends in Bolcom’s stylish comedy Dinner at Eight, set in Depression-era New York and based on a George S Kaufman and Edna Ferber Broadway play of 1932. Here too, sets and costumes are full of style and conviction. And operas about dinner parties – Bolcom is following Hindemith and Lennox Berkeley along this seam – have the built-in advantage that they invariably involve a rich mix of contrasted characters, domestic dramas, farcical possibilities and ensemble opportunities.... Bolcom’s music, efficient and light in touch, is matched by a high-quality libretto by Mark Campbell in which every word is clear." -- Martin Kettle, The Guardian, October 30, 2018

"Composer William Bolcom joined the curtain calls for his piece Dinner at Eight, an entertaining musical version of a depression era play in which preparations for a high-society dinner party go awry. The sumptuous art deco sets framed in a 3-D skyline were a visual feast. Costumes recalled the glamour of the 1930s. Irish singers Sharon Carty and Maria Hughs joined the American cast. The orchestration with prominent reeds and saxophone underscored the big band mood evoked by the Festival Orchestra under David Agler in his penultimate season as artistic director." -- Cathy Desmond, Irish Examiner, October 23, 2018

"Bolcom's music is readily accepted by the public, and his songs give their interpreters the opportunity to shine. With a great libretto, the resulting opera is truly appealing to all." -- José M. Irurzun, Opera World, October 31, 2018 (translated from the Spanish)

"Bolcom’s score is a skillful medley of varied pastiches, played by a Broadway-tinted band that can swell with symphonic sumptuousness in-between-scenes, and withdraw to sensitively support the aria-numbers allotted to each of the struggling protagonists". -- Claire Seymour, Opera Today, October 24, 2018

"Bolcom uses an eclectic range of styles in his score, including Broadway musical numbers, jazz, blues and modernist vocal lines. The work is essentially a hybrid, part Broadway musical and part opera. As the opera progresses, Bolcom gives all the main characters arias which are tightly constructed.... The performers did an excellent job throughout and I was particularly impressed with the clarity of the diction and the shaping and phrasing of Bolcom’s vocal lines. The standout performance of the evening was Mary Dunleavy in the role of Millicent Jordan. Her vocal lines were delivered with power and dynamism and the scene at the end of Act I where she complained about the lobster in aspic being dropped was a tour de force." -- Robert Beattie, seenandheard-international.com